A groundbreaking data product, DEA Coastlines combines satellite data with tidal modelling to map the typical location of the Australian coastline at mean sea level for every year since 1988. Resulting shorelines and detailed rates of change show how beaches, sandspits, river mouths, and tidal flats have grown and eroded over time.

Australia has a highly dynamic coastline of over 30,000 km, with over 85% of its population living within 50 km of the coast. This coastline is subject to a wide range of pressures, including extreme weather and climate, sea level rise and human development. Understanding how the coastline responds to these pressures is crucial to managing this region, from social, environmental and economic perspectives.

Digital Earth Australia Coastlines is a continental dataset that includes annual shorelines and rates of coastal change along the entire Australian coastline from 1988 to the present.

The product combines satellite data from Geoscience Australia's Digital Earth Australia program with tidal modelling to map the most representative location of the shoreline at mean sea level tide for each year. The product enables trends of coastal retreat and growth to be examined annually at both a local and continental scale, and for patterns of coastal change to be mapped historically and updated regularly as data continues to be acquired. This allows current rates of coastal change to be compared with that observed in previous years or decades.

The ability to map shoreline positions for each year provides valuable insights into whether changes to our coastline are the result of particular events or actions, or a process of more gradual change over time. This information can enable scientists, managers and policy makers to assess impacts from the range of drivers impacting our coastlines and potentially assist planning and forecasting for future scenarios.

DEA Coastlines data for the entire Australian coastline is available to download in two formats:

To load GeoPackage data in QGIS:

To load ESRI Shapefile data in ArcMap or QGIS:

To explore DEA Coastlines on the interactive DEA Maps platform, visit the link below:

By default, the map will show hotspots of coastal change at continental scale. Red dots represent retreating coastlines (e.g. erosion), while blue dots indicate seaward growth. The larger the dots and the brighter the colour, the more coastal change that is occurring at the location.

More detailed rates of change will be displayed as you zoom in. To view a time series chart of how an area of coastline has changed over time, click on any labelled point (press "Expand" on the pop-up for more detail):

Note: To view a DEA Coastlines layer that is not currently visible (e.g. rates of change statistics at full zoom), each layer can be added to the map individually from the Coastal > Digital Earth Australia Coastlines > Supplementary data directory.

In December 2021, the DEA Coastlines product was updated to version 1.1.0. This includes the following key changes to the data and web services:

For a full summary of changes made in version 1.1.0, refer to Github.

Annual shoreline vectors from 1988 that represent the median or ‘most representative’ position of the shoreline at approximately mean sea level tide (0 m Above Mean Sea Level) for each year (Figure 1).

A point dataset providing robust rates of coastal change statistics for every 30 m along Australia’s non-rocky (clastic) coastlines (Figure 2). The most recent annual shoreline is used as a baseline for measuring rates of change.

On the interactive DEA Coastlines web map, points are shown for locations with statistically significant rates of change only (p-value < 0.01, see sig_time below). Each point shows annual rates of change (in metres per year; see rate_time below), and an estimate of uncertainty in brackets (95% confidence interval; see se_time). For example, there is a 95% chance that a point with a label -10.0 m (±1.0 m) is retreating at a rate of between -9.0 and -11.0 metres per year.

The rates of change statistics dataset contains the following attribute columns that can be accessed by clicking on labelled points in the web map:

A point layer giving the average rate of change (in metres per year) for significant statistics points within a moving 5 km window along the coastline (Figure 3). This is useful for visualising regional or continental-scale patterns of coastal change.

An extensive validation against independent coastal monitoring datasets was conducted to evaluate the positional accuracy and precision of DEA Coastlines annual shorelines, and the accuracy of our modelled long-term rates of coastal change (i.e. metres retreat or growth per year). In total, 57,662 independent measurements of coastline position were acquired across coastal Australia from the following data sources (Figure 4): 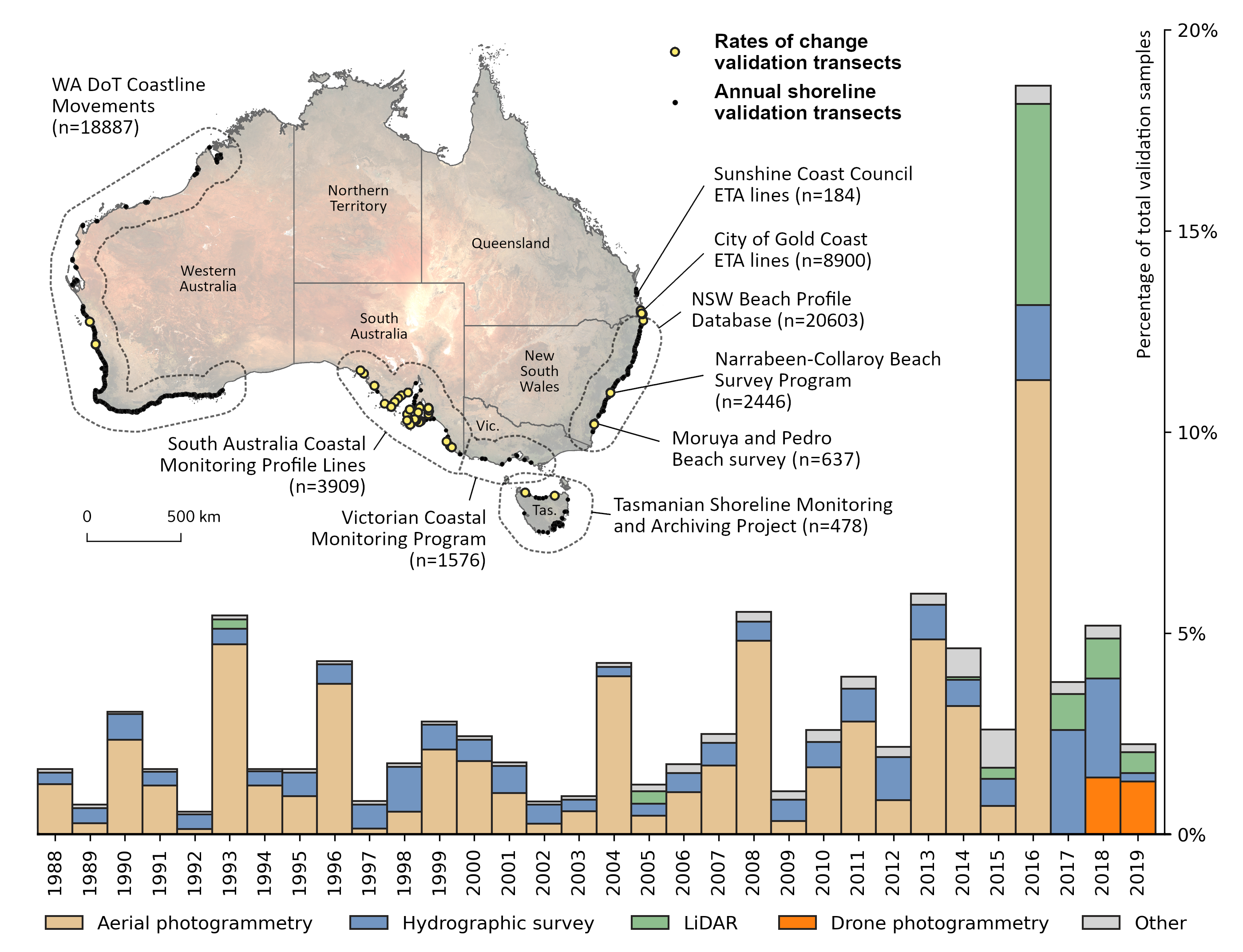 Figure 4: The spatial and temporal distribution of the independent validation data that was compared against DEA Coastlines annual shorelines and rates of change.

To ensure a like-for-like comparison, we selected a subset of validation data with an annual survey frequency approximately equivalent to the Landsat satellite imagery used to generate DEA Coastlines data (i.e. 22 annual observations or greater based on a 16 day overpass frequency). Absolute mapping accuracy (i.e. how far the mapped shorelines were from the median annual position of the shoreline for each year, after correcting for tide) was assessed using Mean Absolute Error (MAE) and Root Mean Squared Error (RMSE):

Shoreline mapping bias and precision (i.e. how well modelled shorelines reproduced relative shoreline dynamics even when affected by substrate-specific seaward or landward biases) was evaluated by calculating the average of all individual errors, then subtracting these systematic biases from our results to produce bias-corrected MAE and RMSE. R-squared was also calculated to compare overall correlations between DEA Coastlines and validation shoreline positions:

For a more detailed breakdown of validation results by substrate, please refer to Bishop-Taylor et al. 2021.

To evaluate our long-term rates of change, we identified 330 validation transects with an extensive (> 10 years) temporal record of coastal monitoring data, encompassing a total of 11,632 independent measurements of shoreline position. We computed linear regression-based annual rates of coastal change (metres per year) between 0 m AMSL shoreline positions and time, and compared these against rates calculated from DEA Coastlines for corresponding years of data to ensure a like-for-like comparison. Validation statistics were then calculated across all 330 transects regardless of statistical significance, and a smaller subset of 144 transects with statistically significant rates of retreat or growth (p < 0.01) in either the validation data or DEA Coastlines: 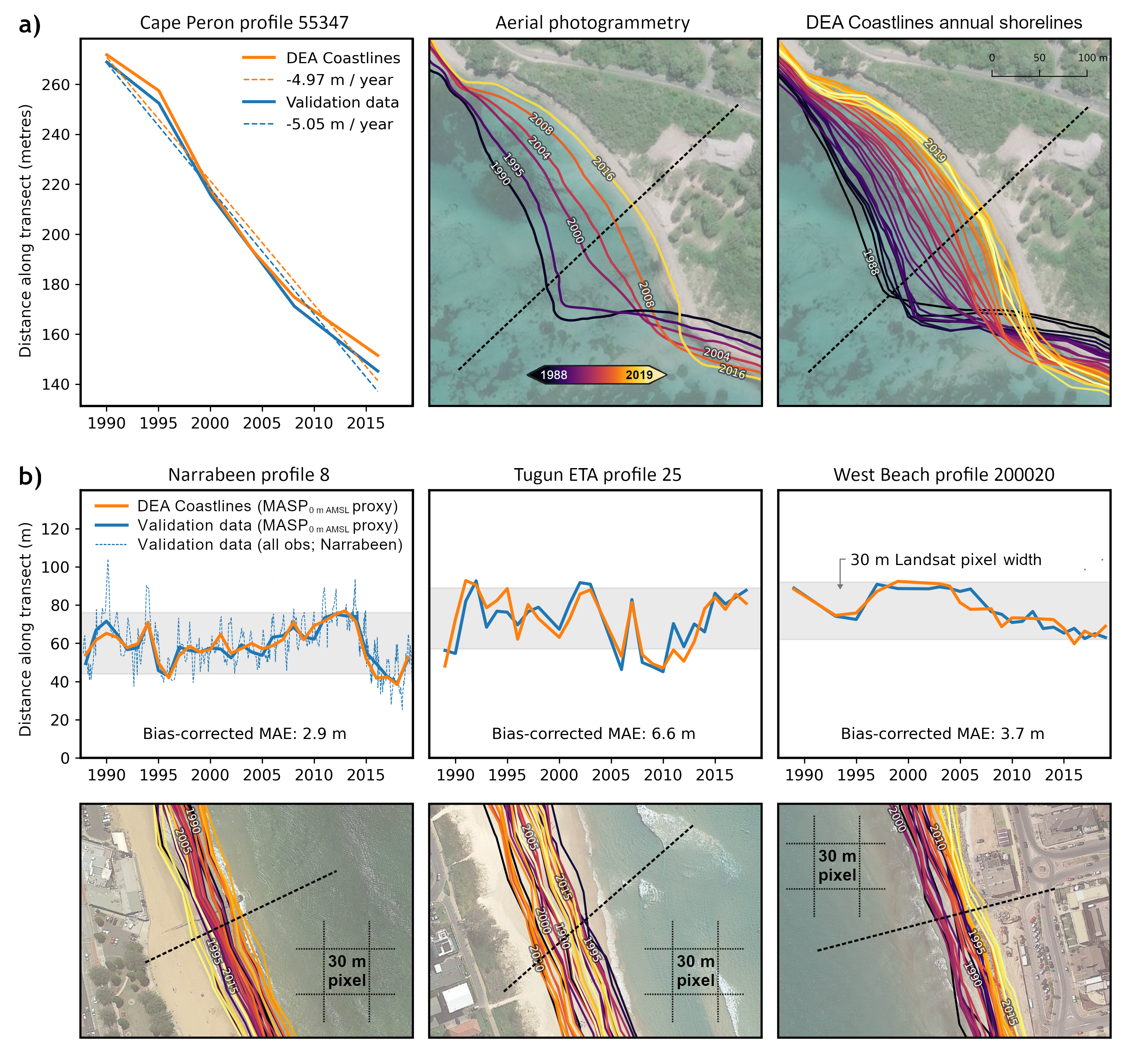 Figure 6: Potentially spurious shorelines in macrotidal coastal regions characterised by gently sloped tidal flat environments: a) Broad Sound and b) Shoalwater Bay, Queensland. Dashed shorelines indicate data that was flagged as affected by tidal modelling issues based on MNDWI standard deviation. In these locations, the TPXO 8 tidal model was unable to effectively sort satellite observations by tide heights, resulting in output shorelines that did not adequately suppress the influence of the tide.

To allow problematic data to be accounted for or excluded from future analyses, all annual shorelines from DEA Coastlines are automatically screened for several potential data quality issues. These issues are flagged in the annual shoreline "certainty" field and symbolised by dashed lines on the interactive map version of DEA Coastlines. These flags include coastlines affected by:

For more information, refer to Caveats and limitations above.

The following software was used to generate this product:

The authors would like to sincerely thank the following organisations and individuals for providing validation data and valuable feedback on preliminary versions of this product:

This research was undertaken with the assistance of resources from the National Computational Infrastructure High Performance Data (HPD) platform, which is supported by the Australian Government.