Digital Earth Australia (DEA) Water Observations uses an algorithm to classify each pixel from Landsat satellite imagery as ‘wet’, ‘dry’ or ‘invalid’. Combining the classified pixels into summaries, covering a year, season, or all of time (since 1987) gives the information on where water is usually, and where it is rarely.

It is important to know where water is normally present in a landscape, where water is rarely observed, and where inundation has occasionally occurred.

These observations tell us where flooding has occurred in the past, and allows us to understand wetlands, water connectivity and surface-groundwater relationships. This can lead to more effective emergency management and risk assessment.

This product shows where surface water was observed by the Landsat satellites on any particular day since mid 1986. These daily data layers are termed Water Observations (WOs).

DEA Water Observations provides surface water observations derived from Landsat satellite imagery for all of Australia from 1986 to present.

The Water Observations show the extent of water in a corresponding Landsat scene, along with the degree to which the scene was obscured by clouds, shadows or where sensor problems cause parts of a scene to not be observable.

The DEA Water Observations (WOs) are used to determine the area of surface water present in the corresponding satellite scene, and can be used for several water monitoring applications. Uses of the individual WOs include:

As the WOs are separated from the derived statistics of the associated DEA Water statistical products, the WOs are most useful for performing analyses requiring the investigation of surface water extent for particular times rather than over long term time series.

4) Select which products you would like to display (Calendar Year, Multi Year, Seasonal) and click 'Add to the map'.

Digital Earth Australia (DEA) Water Observations (WOs) is a gridded dataset indicating areas where surface water has been observed using the Geoscience Australia (GA) Earth observation satellite data holdings. The current product (Version 3.1.6) includes observations taken between 1986 and the present (inclusive) from the Landsat 5, 7 and 8 satellites. WOs cover all of mainland Australia and Tasmania but exclude off-shore Territories. The dataset is updated automatically as each new Landsat scene is acquired and processed to Analysis Ready Data (ARD) state.

Data is provided as Water Observation Feature Layers (WOFLs), in a 1 to 1 relationship with the input satellite data. Hence there is one WOFL for each satellite dataset processed for the occurrence of water. The meaning of each bit in the WOFLs is given in the table below. Prior to version 2.1.5, only one bit could be set per pixel, therefore the value of a pixel in an Observation could be X OR Y OR Z. Hence in previous versions the WOs values could only be 0 or 1 or 2 or 4 or ... or 128. From version 2.1.5 onward the data type has been changed to a bit field, where multiple bits can be set simultaneously. Hence the value of a pixel in an Observation can be X AND Y AND Z, etc, hence values can range from 0 to 255.

This version (3.1.6) has been further updated with changes to the way different factors impeding water detection are dealt with. These changes result in improved detection rates and allow discrimination of different factors impeding water observations. Masking of the ocean with a pre-defined mask has been removed, and the extent of the ocean is now defined by the algorithm. Masking for terrain and solar incident angle have been de-coupled in order to provide better visibility about the reason for masking. The solar incident angle threshold used to remove poor quality observations collected when the sun is at a very low angle has been reduced from 30 degrees to 10 degrees. This change increases the number of observations included in the dataset during winter months while still removing those that are most badly impacted by shadowing caused by low solar incident angle.

The table below describes the meaning of each bit set per pixel in each WOFL. Where multiple factors impeding a clear observation are detected all the respective bits will be set. For example a value of 136 indicates water (128) AND terrain shadow (8) were observed for the pixel. 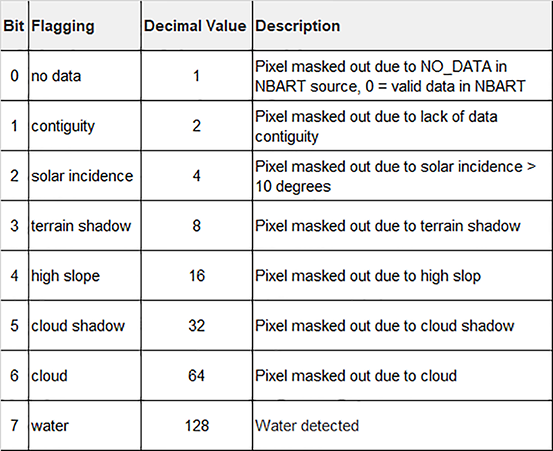 The accuracy of the original Water Observations from Space (WOfS) algorithms was assessed using an independent set of 3.4 million validation points. The points were identified based on visual interpretation of Landsat imagery within 20 test areas across Australia. The points were identified in the same locations as the training data, but were selected from different years (i.e. imagery from one set of years was used to generate points to train the algorithm, and imagery from a separate set of years was used to generate the points that were used evaluate the accuracy of the algorithm).

The classification has an overall accuracy of 97%. Areas identified as water within the accuracy assessment data are being correctly identified 93% of the time and are being misclassified as not water 7% of the time. These errors of omission typically occur along rivers, small waterbodies and swamps where the presence of both water and vegetation within the pixel leads a failure to identify water. This means that the DEA Water Observations product is likely to underestimate the extent of water in locations that contain mixed water and vegetation pixels. As a consequence of this the product may not be fit for applications that require information about the inundation characteristics of vegetated wetlands, small farm dams, and rivers less than 50 metres wide.

Water can be incorrectly detected by the classification algorithm in areas where steep terrain or tall buildings cause frequently shaded pixels. These errors of commission are occurring in 8% of samples used to evaluate the accuracy of the classification. This means that the product may overestimate the amount of water in locations that are adjacent to steep terrain or in dense urban areas. Terrain masks and urban masks were used in the confidence layer to reduce this overestimation, however some residual errors remain. As a consequence of this the product may not be fit for applications that require information about the inundation characteristics of urban areas or locations adjacent to steep terrain.

In addition to the limitations of the classification algorithm, the satellite observation frequency also introduces limitations to the product. The product is likely to be underestimating the extent of inundation for infrequent flood events because the 8 day revisit frequency (best case scenario notwithstanding the possibility of cloud obscuring the floodwaters) will potentially fail to observe the flood peak. This is an intrinsic limitation of the observation strategy. As a consequence of this limitation, the product is not suited to applications that require a. the identification of a ‘maximum extent of inundation’ line, or b. detailed information about the extent of infrequent flood events.

Observation of Earth by the satellites used for this service depends on clear skies. Furthermore, the satellites do not observe all places every day. The Landsat satellites, which are the basis for this service, view a given 185 kilometre wide strip of Australia only once every 16 days. The observations show only what was visible on the day of the satellite pass. As a result, not all historical floods will have been observed by satellite.

The automated surface water detection algorithm, which has been developed by Geoscience Australia, can sometimes mistakenly label large buildings; cloud shadow; large uniform black tarpaulins; or snow as "water". The algorithm is designed to locate large areas of water and as a result may miss small water bodies.

The satellite archive used for this service is of limited duration (1986 to present), and subject to the cloud and repeat coverage restrictions noted above. In addition, Australia is subject to wide variations in weather and climate. Therefore the absence of water observations prior to 1986 in a particular location does not provide certainty that surface water will never be observed there in future.

The probability that surface water may appear at a given location may vary over time due to changes in drainage and other infrastructure (such as dams). Where such changes have occurred, the historical water observations for that location may no longer give a true picture of the future probability of surface water being observed.

Digital Earth Australia (DEA) Water Observations is derived from Landsat 5, 7 and 8 imagery. Imagery is initially corrected to Analysis Ready Data (ARD) standard, and masked for cloud, cloud-shadow, data contiguity, steep slope, solar incidence angle, and terrain shadow. Water classification is achieved using a decision tree based on the individual spectral bands of the Landsat satellites and derived normalised difference indicies associated with water and vegetation. The output is then stored as an 8-bit, bit-field with values from 0 - 255 indicating the presence or absence of each mask type and the presence or absence of water.

The image shows the percentage of time since 1987 that water was observed by the Landsat satellites on the floodplain around Burketown and Normanton in northern Queensland.