This is a sub-product of DEA Surface Reflectance 3 (Sentinel-2A). See the parent product for more information.

The contextual information related to a dataset is just as valuable as the data itself. This information, also known as data provenance or data lineage, includes details such as the data’s origins, derivations, methodology and processes. It allows the data to be replicated and increases the reliability of derivative applications.

Data that is well-labelled and rich in spectral, spatial and temporal attribution can allow users to investigate patterns through space and time. Users are able to gain a deeper understanding of the data environment, which could potentially pave the way for future forecasting and early warning systems.

The surface reflectance data produced by NBAR and NBART requires accurate and reliable data provenance. Attribution labels, such as the location of cloud and cloud shadow pixels, can be used to mask out these particular features from the surface reflectance analysis, or used as training data for machine learning algorithms. Additionally, the capacity to automatically exclude or include pre-identified pixels could assist with emerging multi-temporal and machine learning analysis techniques.

This product is contained in the Open Data Cube instance managed by Digital Earth Australia (DEA). This simplified process allows you to query data from its sub-products as part of a single query submitted to the database.

How observation attributes can be used

This product provides pixel- and acquisition-level information that can be used in a variety of services and applications. This information includes:

This product allows you to screen your data for undesired anomalies that can occur during any phase: from the satellite’s acquisition, to the processing of surface reflectance, which relies on various auxiliary sources each having their own anomalies and limitations.

Pixel-level information on satellite and solar geometries is useful if you wish to exclude pixels that might be deemed questionable based on their angular measure. This is especially useful if you are using the NBAR product, where pixels located on sloping surfaces can exhibit a lower than expected surface reflectance due to a higher incidence or solar zenith angle. 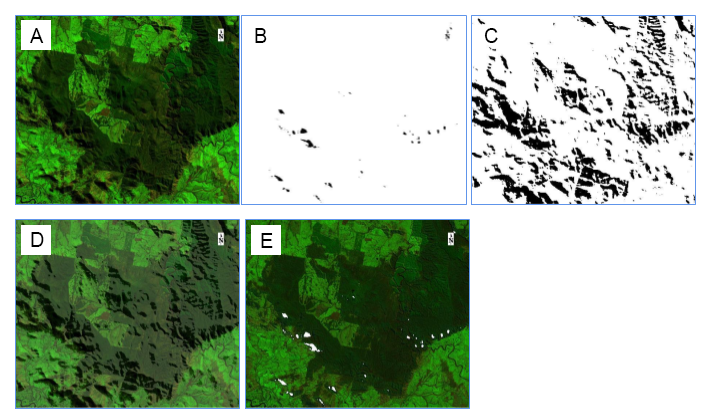 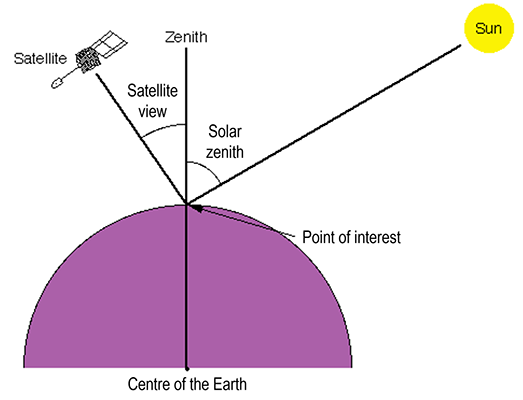 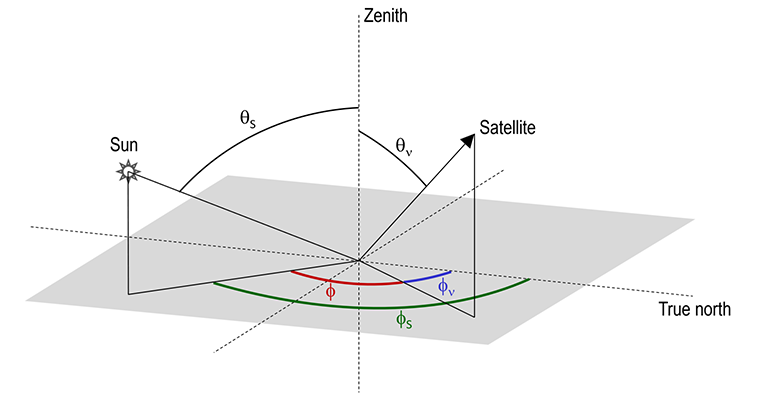 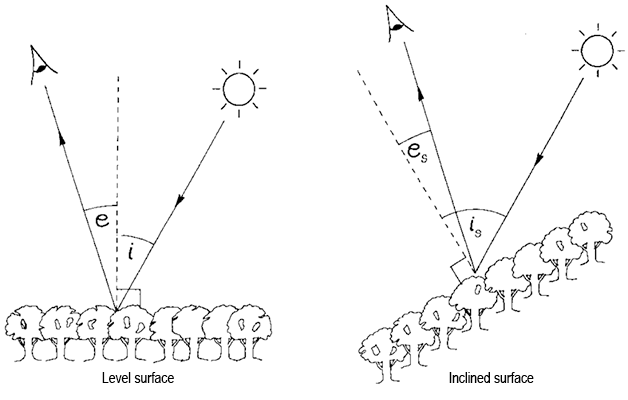 Figure 4. Incident (i) and exiting (e) angles for a level and inclined surface. Image modified from Dymond and Shepherd (1999).

Fmask allows you to have pre-classified image content for use within their applications. This can include:

The result of the Fmask algorithm contains mutually exclusive classified pixels, and the numerical schema for the pixels are as follows:

The spectrally contiguous pixels which have a valid observation in each spectral band. This is particularly useful for applications undertaking band math, as it allows non-contiguous data to be ignored during the band math evaluation or masked during post-evaluation. The product can be utilised as a strict mask, and the numerical schema for the pixels are as follows:

The terrain-shaded pixels product can be utilised as a strict mask and exclude pixels that were unobservable by the sun or sensor. The numerical schema for the pixels are as follows: 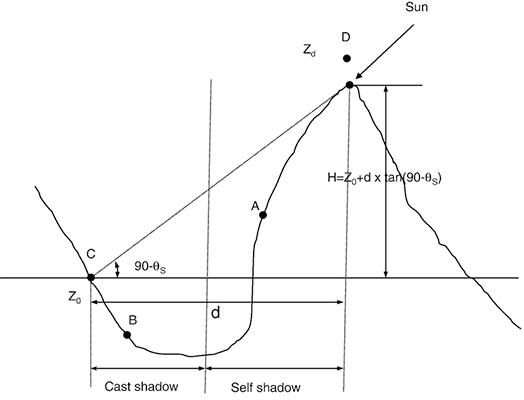 Some analyses might want to exclude targets that are obscured by cloud or cloud shadow. This is particularly useful for applications looking to harvest statistical information for particular regions of interest, such as field crops, where large swaths of data aren't required to be loaded into computer memory. Instead, only the regions of interest are loaded, analysed and summarised, reducing computational costs.

Figure 6. (A) False colour composite; (B) the resulting Fmask classification.

For this product, the Fmask dataset has had the object dilation for the cloud and cloud shadow layers removed. This enables you to customise object dilation to meet your needs for specific applications. For example, one application might work better having a 7-pixel dilation, whereas another might require 5.

You can also choose your own kernel shape and size in which to apply a particular dilation. Dilation can be useful for filling holes within objects and extending the edges of detected objects. It is important to note that small objects (e.g. 1 or 2 pixels in size) will be dilated and become large objects. If this is an undesired outcome, it is best to filter out any small objects prior to applying dilation filters.

For more information on dilation, see:

Fmask has limitations due to the complex nature of detecting natural phenomena, such as cloud. For example, bright targets, such as beaches, buildings and salt lakes often get mistaken for clouds.

Fmask is designed to be used as an immediate/rapid source of information screening. The idea is that over a temporal period enough observations will be made to form a temporal likelihood. For example, if a feature is consistently being masked as cloud, it is highly probable that it is not cloud. As such, derivative processes can be created to form an information layer containing feature probabilities.

Edges and fringes of clouds tend to be more opaque and can be missed by the cloud detection algorithm. In this instance, applying a morphological dilation will grow the original cloud object and capture edges and fringes of clouds. However, it is important to note that other cloud objects could also be dilated. Be mindful of single-pixel objects that could grow to become large objects. Consider filtering out these small objects prior to analysis.

The Digital Elevation Model (DEM) is used for identifying terrain shadow, as well as producing incident and exiting angles. It is derived from the Shuttle Radar Topography Mission (SRTM) and produced with approximately 30 m resolution. As such, any angular measurements and shadow classifications are limited to the precision of the DEM itself. The DEM is known to be noisy across various locations, so to reduce any potential extrema, a Gaussian smooth is applied prior to analysis.

The authors evaluated the Fmask algorithm using a total of 188 randomly selected Worldwide Reference System (WRS) locations across nine latitudinal zones. From these locations, 212 Landsat scenes were used as a reference set as part of the accuracy assessment. The average accuracy for cloud detection was 96.4%.

The calculation of the satellite and solar positional geometry datasets are largely influenced by the publicly available ephemeris data and whether the satellite has an on-board GPS, as well as the geographical information that resides with the imagery data and the metadata published by the data providers. The code to generate the geometry grids is routinely tested and evaluated for accuracy at >6 decimal places of precision.