WOfS is a gridded dataset indicating areas where surface water has been observed using the Geoscience Australia (GA) Earth observation satellite data holdings. The WOfS product Version 1.0 includes observations taken between 1998 and 2012 (inclusive) from the Landsat 5 and 7 satellites. Future versions of the product will extend the temporal range and diversify the data sources. WOfS covers all of mainland Australia and Tasmania but excludes off-shore Territories. 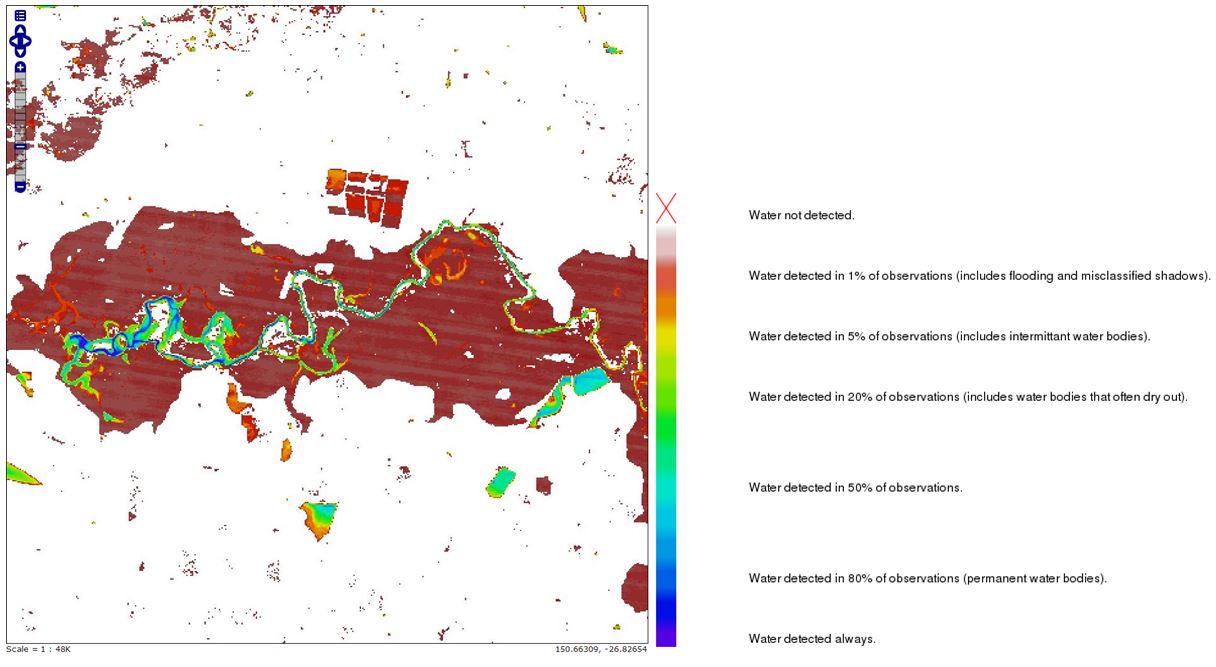 WOfS is a gridded dataset indicating areas where surface water has been observed using the Geoscience Australia (GA) Earth observation satellite data holdings. The WOfS product Version 1.0 includes observations taken between 1998 and 2012 (inclusive) from the Landsat 5 and 7 satellites. Future versions of the product will extend the temporal range and diversify the data sources. WOfS covers all of mainland Australia and Tasmania but excludes off-shore Territories.

WOfS 1.0 shows water observed for every Landsat-5 and Landsat-7 image across Australia (excluding External Territories) for the period of 1998 to 2012. Future versions of the product are expected to include Landsat-8 and other observations, and are expected to be up-dated quarterly.

WOfS 1.0 is a cumulative “summary” that combines all water observations from the entire time series into a single gridded dataset. The dataset includes four values for each grid cell, viz:

The Confidence Level assigned to each water observation is based on a statistical analysis of factors, including topographic position, elevation and slope, other independent satellite observations of water, topographic maps of water features, and the observation frequency. The confidence layer can be used to filter uncertain observations, for instance when displaying the data.

In the future, WOfS may be updated regularly as new data are added. This is potentially possible because WOfS is produced using the Australian Geoscience Data Cube, containing GA’s entire Australian Landsat archive in a supercomputing environment at the National Computational Infrastructure.

The Water Observations from Space product (WOfS) is a key component of the National Flood Risk Information Portal (NFRIP)2, being developed by Geoscience Australia (GA). The objective of WOfS is to analyse GA’s historic archive of satellite imagery to derive water observations, to help understand where flooding may have occurred in the past.

WOfS is being developed in parallel with the National Flood Studies Database system which will provide Flood Study documentation and reports to a wide range of users. Both systems will be delivered via the internet through the NFRIP portal.

Satellite imagery has been used to map floods around the world for several years. Organisations such as the Colorado Flood Observatory in the USA and several state-based agencies in Australia regularly provide satellite-based flood extents for major flood events. GA developed a flood mapping methodology in 2008-2009 that was extensively used for the major Australian flood events since 2010, providing emergency service agencies with regional flood extent information.

The Phase 1 outputs from the NFRIP were delivered to the public in November 2012, including a proof of concept of WOfS. This displayed surface water extents for three study areas, including the original derived extents and the cumulative summary product. Subsequent stakeholder feedback has shown that the most desirable information is the summary product, providing and understanding of the long term dynamics of surface water.

The Phase 2 outputs from the NFRIP (release in April 2014), include this WOfS product, which will be accessible to the public as a web service from the NFRIP.

Reviews of prototype products identified the need to indicate the level of confidence for the surface water observations. The confidence level will help the user to distinguish between unusual but valid water detections (such as flood plains which might only be observed as water once in the 15 year interval) and ‘false positives’ which can be caused, for instance, by steep shady slopes.

The confidence level was determined through a multiple logistic regression of water observations against several factors that would either support or contra-indicate the finding of water being present at the site.

Slope derived from SRTM Digital Surface Models. Water pixels on a slope were considered less plausible than those on a flat surface.

Built-Up areas indicating areas of dense urban development. In such areas the water detection algorithm struggles to cope with the deep shadows cast by multi-story buildings and the generally noisy spectral response created by structures. The Built-Up layer is derived from the Ausralian Bureau of Statistics ASGS 2011 dataset, for urban centres of populations of 100 000 and over.

The primary purpose of the WOfS product is to help understand where flooding may have occurred in the past. This has application in emergency management and risk assessment.
It is anticipated that WOfS will have many secondary uses. For example the WOfS product provides an indication on the permanence of surface water in the Australian landscape by showing where water is observed rarely in comparison to where it is often observed. This has application in water management and mapping.

Water Observations from Space is supplied as a WMS web service through the Portal of the National Flood Risk Information Project: http://www.ga.gov.au/hazards/flood.html

The service provides an Australia-wide coverage of the summary of water observations through time draped over a Google-Earth background. The coverage may be interrogated to provide information on: